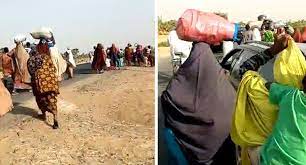 News reaching NEWS NAIJA says Residents of Kanamma, the headquarters of Yunusari Local Government Area of Yobe State, were made to flee their town with many sleeping overnight in the bushes as Boko Haram laid siege.

NEWSNAIJA   gathered that the group attacked the town in ten gun trucks at about 6.30 pm on Thursday making the residents flee into bushes and neighboring villages for safety.

The number of casualties and the level of destruction from the attack could not be determined as of the time of filing this report as the mobile network was bad.

Confirming the attack to journalists on Thursday night, ASP Dungus Abdulkarim,  the Police Public Relations Officer of the Yobe State Police Command, said the gunmen  attacked Kanamma but the details were not available.

He said on phone, “Yes, there was a Boko Haram Insurgents attack on Kanamma. Unfortunately, we have lost contact with our people there due to the absence of mobile network in the area. We will update you when we reach out to them.”