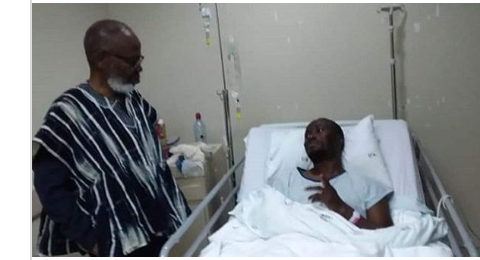 A Ghanaian footballer identified as Arthur has been reportedly shot in both legs at a close range by South African police near Kempton Park as xenophobic attacks in South Africa continues.

It was revealed that the footballer who has been playing soccer in South Africa for two years was shot for no crime committed.

Narrating how it happened, Arthur said, he did not commit any crime or have any engagement with the police which resulted in the shooting.

Ghana’s Ambassador to South Africa, George Ayisi -Boateng lamented about the incident. He noted that arrangements had to be made by the embassy to rush Arthur to the hospital when the incident occurred.

Hon. Ayisi Boateng who was captured in a photo with Arthur while on his hospital bed expressed worry at the situation