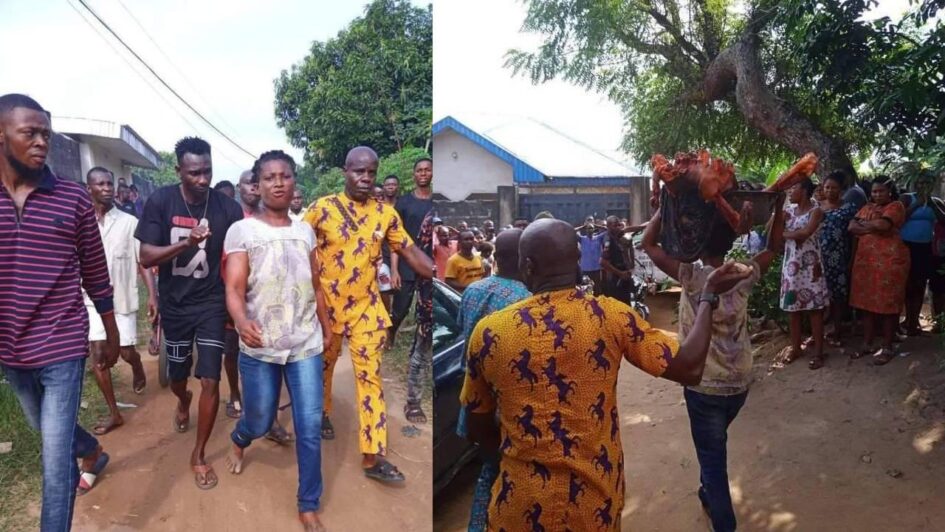 residents of Umoh Obot Street, off Nto Akpan Inyang in the Ikot-Ikpene Local Government Area of Akwa Ibom State were thrown into fear following the alleged gruesome murder of one Eka Ime by her daughter, Mary Imewe, on Friday.

NEWSNAIJA gathered that the suspect murdered her mother and dismembered her before she was caught.

A resident on Sunday said angry youths of the community, who were angered by the awkward manner in which Ime allegedly murdered her mother, compelled her to pack the body parts into a basin and walk around the community.

According to the source, who pleaded anonymity, when the police came to arrest Ime, she stated that she did not care about her arrest and detention.

“I don’t care if I am arrested and detained by the police,” the suspect was quoted to have said before being dragged into a waiting police van.

Odiko Macdon, the  command’s Public Relations Officer, who confirmed the incident, told our source on Sunday said  he was surprised that a daughter could commit such an evil act against her mother

The PPRO  said no right-thinking person would slaughter their mother in such a gruesome manner, adding that the police would conduct a test to ascertain Ime’s state of mind before she would be charged.

Macdon stated, “The story is true, Ime butchered her mum. We are suspecting that she is not of a sound mind, but we do not have any medical capacity yet to say so.

“Medical personnel will have to determine if she is of a sound mind or not because no right-thinking person will kill her mother by butchering her.

He said “As we speak, we have her in our custody. We have gathered the parts of her mother and deposited them in the mortuary. By the time we ascertain her state of mind, we will charge her accordingly. The test will determine the extent of her culpability in the crime.”