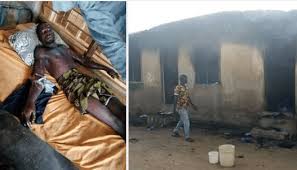 A lady yet-to-be-identified has reportedly set her boyfriend ablaze in his house in Gboko town, in the Gboko Local Government Area of Benue State.

The suspect, who is on the run, was said to have taken the decision after the boyfriend, identified simply as Jude, ended their relationship.

NEWSNAIJA learned that the two love birds had been in the relationship for some time until Jude decided to call it a quit.

A resident, who gave his name simply as  Bem, stated that Jude ended the relationship because of the girlfriend’s attitude and hatred for his mother.

This, however, did not go down well with the girlfriend.

Bem further explained that the girl, after setting the victim’s house on fire, padlocked the door from outside, jumped on a waiting motorcycle outside the compound, and took off to an unknown destination.

He said, “The two lovebirds had a heated argument earlier that day when Jude asked her to pack out of his house.

“He thought that he had heard the last of it, but he was wrong. About 1.30 am, the girlfriend returned to the compound with three men. They tore open the window nets and started pouring a substance suspected to be petrol into the room through the window.”

Bem further revealed that the victim was receiving treatment at an undisclosed hospital in Gboko.

DSP Catherine Anene,  The state Police Public Relations Officer, who confirmed the report, said the police had launched a search for the fleeing suspect.