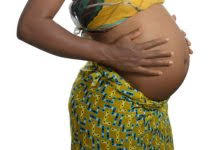 A pregnant woman in labour has reportedly fell off delivery bed and died in the Delta community of Ogwashi-uku.

NEWSNAIJA learned the nurses on duty left the woman unattended, who were alleged to have slept off as she was brought to the hospital late in the night.

Sources said that the incident happened at the General Hospital, Ogwashi-Uku.

NEWSNAIJA further learned that the pregnant lady was rushed to the hospital late in the night after she fell into labour for her first child.

But the nurses on duty reportedly slept off after the lady’s caregiver was said to have gone home to pick some delivery items.

However, the care-giver was said to be shocked as she returned to the hospital only to find the woman dead on the floor while the nurses were sleeping.

A video recording on the incident which has gone viral in Delta State showed a woman lying lifeless while the person behind the camera lamented over what was tagged the lackadaisical attitude of personnel at Ogwashi-Uku General Hospital.

Meanwhile, when the police public relations officer for Delta State command, DSP Bright Edafe was contacted, said he was unaware of the incident.