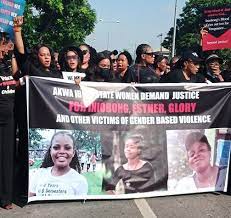 Dr. Martha Emmanuel,  the wife of the Akwa Ibom State Governor on Wednesday led the women of the state in a protest against the murder of the 26-years old Iniubong Umoren.

Umoren,  who is a graduate of philosophy from the University of Uyo, Akwa Ibom State, was abducted, sexually assaulted, and later killed a  Man known as  Uduak Akpan under the guise of finding her a job.

The women all dressed in black attire converged around 8 am and walked slowly down to the Government House.

While addressing the protesters, Emmanuel said, “Let me restate the position of the Akwa Ibom State Government and promise  you that there will be justice not only for Iniobong Umoren but for all victims of gender-based violence in Akwa Ibom State.”

Meanwhile, Dr.  Ini Adiakpan, the Commissioner of Women Affairs, decried the abuses meted out to females and charge women to unite and fight a common cause.

Also, Emem Ette, the Chairperson of FIDA, said the group would continue to defend women.