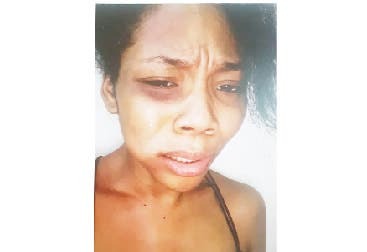 A 24-year Lagos-based beautician, identified as Diana Kafaru, has accused her husband, Temidayo, of assaulting her and molesting their five-month-old baby at their residence at the Bricks Court Estate in the Lekki area of the state.

Diana stated that she found her husband on May 8, 2020, molesting their baby by putting his manhood in her mouth.

Speaking to our source  Diana stated that after the matter was reported to the state Domestic and Sexual Violence Response Team, Temidayo refused to honour the invitation of the agency, adding that efforts to arrest him by policemen attached to the State Criminal Investigation and Intelligence Department, Panti, Yaba, were frustrated by one AIG Dilbal Yakadi.

“Temidayo failed to honour several invitations of the DSVRT until an email was sent to his employer that the attention of their employee was needed in respect of allegations against him at the DSVRT.

“Temidayo promised to honour the invitation but he never appeared before the team at the appointed date, which made the DSVRT to escalate the matter to the SCIID and the case was assigned to the Gender Violence Unit to assist in apprehending him, but this was frustrated by AIG Dibal Yakadi, who was our neighbour at the estate.

She said “Yakadi ordered the policemen to remove their vehicles from the estate on the day they went to arrest Temidayo and he vowed that I was going to receive a summons from the Zone 2 Command and when I was invited, I went there with my housemaid, who my husband raped, and we gave our statements.”

Diana, who urged  Mohammed Adamu, the Inspector-General of Police, to order an investigation into her allegations, stated that the police had refused to arrest the suspect despite constant threat to her life by him.

Titilola Vivour-Adeniyi, The DSVRT Coordinator, while confirming Temidayo’s refusal to honour the agency’s invitation, said he initially promised to appear on Monday, July 27, 2020, but refused to come.

When Temidayo   was contacted , he did not take his calls and when a message was sent to him via Whatsapp, he said the case was pending before the IG.

Temidayo later sent the copies of the application in a fundamental right suit he filed through his counsel, Ebinmi Beredugo, before the Lagos High Court dated July 3, 2020.

An affidavit in support of his application, stated, “It is expedient to state that the 4th respondent is using the officers of the 1st, 2nd and 3rd respondent to assault, harass, molest and threaten the applicant’s life without any just cause in a bid to punish him that he failed to do her bidding of being the chief controller of the applicant’s home against his marital vows.