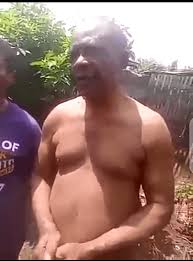 The pastor of a new generation church in Igbo-Etche, in the Etche Local Government Area of Rivers State, has been stripped naked by members of a vigilante group for allegedly defiling his three daughters.

The Pastor, who confessed to the crime in a viral video seen on social media, was stripped by the group known as the Onelga Security, Peace, and Advisory Council.

He was also beaten in the presence of his wife and son for the act.

NEWSNAIJA gathered that the pastor’s son reported the incest to the security guards after he learned that his mother had been covering up the crime of her husband.

The local guards were said to have mobilized to the pastor’s residence, took him outside, and stripped him naked.

In the video seen by our source, a member of the group asked why the suspect defiled his daughters.

Responding, the cleric said, “It is because of a witchcraft force. My mother told me not to marry this woman (pointing to the wife), but I continued to marry her.  So, my mother did that to punish me and bring shame on me.”

Asked the name of his church and how many members he had, the pastor said, “My church is in Chuwuta in Ibgbo-Etche. I have many members but I have not had sex with any of the women in my church.”

Angered by his explanation, a man suspected to be the leader of the vigilantes, slapped the pastor, while two other members flogged him with canes.

A member of the group turned to the suspect’s wife, who said she was 56 years old, demanding what she did after discovering the crime.

“I cannot do anything because I love my husband and I cover him. But I told him not to do it again. I cover him because of love,” she responded.