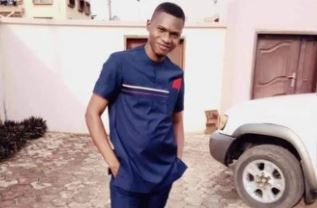 NEWSNAIJA learned Nwoke,  has been murdered by unknown assailants, until his death, he taught in the Department of Physiology in AE-FUNAI.

His body was found along the Abakaliki rice mill axis of Ogoja Road, on Monday, with bullet wounds.

NEWSNAIJA further gathered that the deceased was using his car for a taxi in order to fend for himself and his family following the hardship caused by the prolonged disagreement between the federal government and the Academic Staff Union of Universities which has led to the withholding of salaries of lecturers for months.

The lecturer was said to have gone missing on Sunday after a yet-to-be-identified person called him to come to Udemezue in Abakaliki to pick customers to a popular eatery along Ogoja Road.

Owing to the withheld salaries of lecturers for over four months, Kyrian registered his car for taxi service to be able to feed his family (wife and his 2-year-old daughter).

“Kyrian was called to go and pick customers at Udemezue street and drop them at a popular eatery known for local delicacies at Ogoja Road, Abakaliki, on Sunday 10th January. He didn’t return as his lifeless body was found the next day near the Rice Mill along the same Ogoja road with bullet wounds on his body and his car missing.

He said  “My prayer is that the culprits of this evil act will never go unpunished. Ebonyi State Government and indeed security agency should sit up and bring the evildoers  to book.”

DSP Loveth Odah,  the Police Public Relations Officer in the state,  when contacted, said the Command was yet to receive an official report of the murder of Mr. Nwoke.