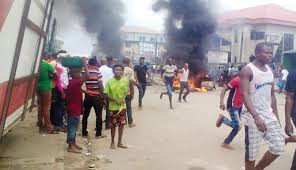 Two men suspected to be robbers were on Sunday set ablaze in the Akuma community, Oru East Local Government Area of Imo State.

NEWSNAIJA learned the robbers were caught while dispossessing a woman of her Android phone in the community.

According to the report gathered from villagers, the woman had gone to the Akuma adding that the suspects operated on a motorcycle.

One of the sources said, “They stopped in front of the woman and ordered her to hand them over her phone to them.

“But the woman refused and instead raised the alarm, which alerted the villagers despite the fact that one of the robbers pointed a gun at her.

“The villagers, most of whom were watching football from a nearby viewing center, mobilized against the robbers and attacked them.

“The robbers had confidence in their charms, which made them withstand gunshots from some vigilante operatives.

While one of them managed to escape, the unlucky two were nabbed, beaten to a pulp, and taken to the market square, where they were set on fire by the mob.”

The  spokesperson for the state police command, Orlando Ikeokwu, when contacted  promised to get back to our correspondent but had yet to do so as of the time of filing this report