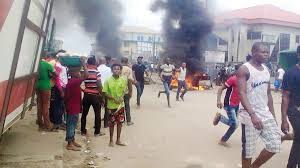 Two suspected armed robbers were set ablaze by a mob along Okumagba Avenue, by Emebiren junction in Warri, Delta State, in the early hours of today, Tuesday.

NEWSAIJA learned that the two guys were pursued to the location where they were caught and beaten to stupor before they were set ablaze.

Sources said that the suspected robbers had invaded the area about 5:30 am in a commercial tricycle to operate, but were nabbed by the mob.

CSP Benjamin Igometi,  The Divisional Police Officer, “B” Division in Warri,  when contacted on the telephone confirmed the incident.

Igometi said he received distress calls from the neighborhood in the early hours of the day that some robbers were operating.

He said,” They just called me just now that some robbers came to attack in that area, and they caught them, and they were lynched. That’s what I heard.”.

DSP Onome Onovwakpoyeya, The Police Public Relations Officer for the State Command, could not be reached for comments as of the time of filing this report.