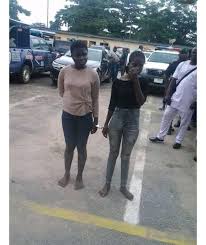 Two sisters in Enugu’s names withheld allegedly sent assassins to kidnap and murder their biological parents with the intention of forcefully inheriting their property.

According to series of reports gathered by NEWSNAIJA  the Enugu State Police Commander said, the girls have been arrested by the Enugu state police command after they were reported by their family members for killing their parents

He said in the cause of the investigation, the police discovered that the kidnap and assassination of a popular rich man were all planned by his children because of selfishness after series of investigations and interrogations they confessed to sending the assassins to kill their parents out of selfishness because they wanted to embezzle the parents’ wealth quick.

NEWSNAIJA  learned that the parents of these young girls were very rich and famous with so much wealth tie to their name, there is no reason whatsoever for these girls to kill their parents because finally all the wealth would have been allocated to them.

During interrogations, One of the two girls stated that her main reason for killing her father was because her dad never cared for them but has the money to spend on women outside she said that their father was a very rich man but has never bought them clothes. She claimed the father was a very wicked and stingy man that’s why they planned to kill him so they inherit his wealth.

The High Court sitting in Enugu on the 27th of January 2020 after hearing all the charges read against the young girls admitted them of committing murder which is against the constitution, the presiding judge sentenced the two girls to death by hanging.

However,  the state government will be available to sign the death warrant.

The judgment according to people was a well-deserved judgment.