TWO MEN WHO OPERATES WITH FAKE PISTOL IN LAGOS APPREHENDED 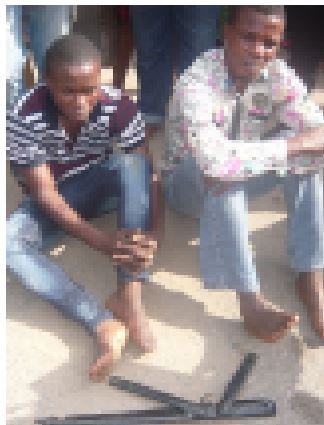 Two suspected traffic robbers,  identified as Ishola Taye aged 24 and Adebayo Oluwafemi, have been arrested by the Lagos state policemen attached to the Ilupeju Division of for terrorizing the Onipanu and Anthony areas of the state.

Newsnaija learned that Ishola was attempting to dispose of passengers in a commercial vehicle of their valuables at the Onipanu bus stop when policemen on routine patrol apprehended him.

The PPRO   said a fake pistol used for the operation was recovered from Ishola, adding that the suspect would be charged.

The PPRO in his statement said, “On August 14, 2020, around 7.50 am, while on routine patrol on the Ikorodu Road, around Fadeyi, a team of anti-crime patrol personnel led by ASP Aludo Patrick caught one Ishola Taye, 24, who was attempting to dispose a passenger of her valuables at the Onipanu bus stop; the suspect took to his heels but was later caught.

He said “During a search, one toy Beretta pistol designed like a normal pistol was recovered. Also, the suspect confessed to the crime.”

In the same vein, Oluwafemi was also arrested while robbing a passenger of her phone at the Anthony bus stop on the Ikorodu Road.

The PPRO  said “Ishola and Oluwafemi have been transferred to the Special Anti-Robbery Squad and will be charged for the crime.

Elkana stated They are among the notorious criminals terrorizing users of the road.