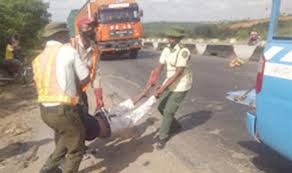 Two persons were on Monday confirmed dead, while four others sustained varying degrees of injury in a lone accident.

The accident involved a Sharon space bus on the Lagos-Ibadan Expressway around Fidiwo in the Obafemi-Owode Local Government Area of Ogun State.

Mr. Babatunde Akinbiyi,  a spokesperson for the Traffic Compliance and Enforcement Corps, explained that the crash, which occurred at 11.20 am, was caused by over speeding and loss of control.

Akinbiyi explained that the bus, with number plate, YEE 202 XA, skidded off the road and somersaulted into a swampy ditch.

According to Akinbiyi, seven people were involved in the accident: two men, four women, and one girl.

The TRACE official said two of the women died.

“According to an eye witness, the driver was on top speed when he suddenly lost control of the vehicle, skidded off the road and somersaulted into a ditch, with two female passengers on board the commercial Sharon space bus dying on the spot,”.

The spokesman said the injured passengers were taken to the Victory Hospital, Ogere, while the deceased was deposited at the FOS Morgue, Ipara-Remo.