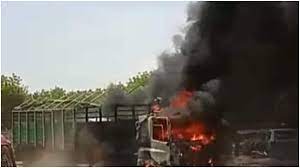 NEWS NAIJA two people have been reportedly killed while about 11 others sustained several degrees of injuries when a gas cylinder exploded inside a garage in Azare town, Katagum Local Government headquarters of Bauchi State.

A source in Azare said that the driver of a trailer drove into the garage with the intention of carrying out some repairs in the workshop of a welder.

“It was in the process that a gas cylinder used by another welder on a vehicle exploded suddenly.

It was learned that “The fire from the explosion then spread to where the trailer was parked and it immediately caught fire and affected people around the garage.

He said “This caused pandemonium as people scampered for safety from the raging flame, burning many in the process,”

According to the source, the driver died in the process of trying to move the trailer outside the garage.

As of the time of filing this report, 11 people were said to have been seriously burnt and are currently receiving treatment at the Federal Medical Center and the General Hospital in Azare town.