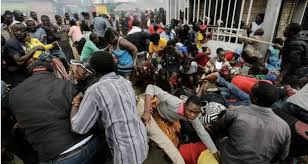 Eight persons are feared dead after a stampede that occurred when members of Non-Governmental Organisation besieged one of its offices in Rumuodara, along the East-West Road, near Port Harcourt.

However, police in the state confirmed that two people died.

NEWSNAIJA learned that the organization had invited its registered members to receive their Christmas package at the location on Tuesday.

One of the members, who gave her name simply as Chinaza, said that many people showed up for the package and were in a hurry to access the building.

Chinaza,  said that the situation led to a stampede, adding that people stepped on others in order not to miss out on the palliative.

She further stated that “Many were injured in the pandemonium,”.

A viral online video shows some of the victims with bruises, while others have collapsed some people were also seen trying to rescue those who had collapsed.

Meanwhile, Nnamdi Omoni,  spokesman of Rivers State Police Command, confirmed the incident, saying the Commissioner of Police has ordered a full-scale investigation into the incident.

Omoni in a statement said, “I can confirm the incident of this morning, at an event center, along the Rumuodara axis of the East/West Road, Obio/Akpor LGA, where palliatives were being distributed by INKSNATION, a Non-Governmental Organisation to her registered members from Ikwerre, Emohua, and Obio/Akpor Local Government Areas, when suddenly there was a stampede leading to the death of two people.

He said “Some sustained various degrees of injuries and are currently receiving medical attention. Meanwhile, the situation is under control. The Commissioner of Police, CP Joseph Mukan has instituted an immediate investigation  into the unfortunate incident with a view of knowing the real  circumstances  that led to the stampede and bringing those  found culpable to justice.”