TRUCK SET ABLAZE AFTER CRUSHING THREE TO DEATH IN ONDO 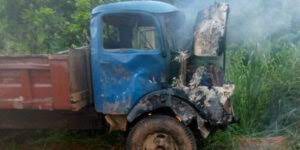 NEWS reaching us says not less than three persons were reportedly crushed to death by a truck along Akure-Ondo Expressway in Akure, the Ondo State capital on Thursday.

An eyewitness stated that the accident involved the truck and a commercial motorcycle popularly known as okada while the deceased was on the motorcycle.

The eyewitness said the accident was caused by recklessness on the part of the motorcyclist and the driver of the truck.

He said “The truck ran over the three men who were on the okada, and the three of them died on the spot,”

NEWS NAIJA learned as a result of the incident some youths suspected to be okada riders in the area allegedly set the truck ablaze. It took the intervention of the police to stop the matter from degenerating into a crisis.

The Ondo Sector Command of the Federal Road Safety Corps confirmed the incident.

Abiola Fadumo, The Public Relations Officer of the command, said the intervention of the policemen helped to calm the situation.

Meanwhile, Mr Tee-Leo, the spokesman of the state police command, Ikoro, said the matter had not been reported at the time of filing this report