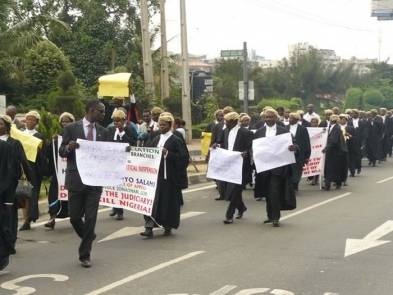 Lawyers under the Lekki Forum of the Nigerian Bar Association have vowed to embark on series of mass actions in protest of recent acts of the government against the people.

The lawyers also claimed that the latest acts by the government are posing threats to democracy and rule of law in the country.

While addressing journalist in Lagos on Monday, Secretary of the NBA Lekki Forum, Ayodele Ademiluyi, expressed distraught at the flagrant disregard for court orders by the Nigerian Government.

Ademiluyi also lamented the continuous disrespect of the court by the Department of State Services, a security agency that is under the direct supervision of the Presidency.

He said, “We unequivocally make this assertion based on the latest flagrant disobedience of a valid and subsisting court order by the Department of State Services directing the release of Omoyele Sowore.

“We view all these desperate moves of the administration as a descent to dictatorship and authoritarianism.”

The group also reiterated the United Nations Rapporteur Special Report on Nigeria detailing the continued detention of prisoners of conscience employing Terrorism Act, treasonable felony among others, which evidences the attacks on democratic rights.

The NBA Lekki Forum asserted that there are ongoing efforts by the government to further impoverish citizens through its renewed charges on cash transactions by Nigerians.

He added, “We are aghast that there is a grand attempt to milk more money from already impoverished Nigerian masses with the increase of the Value Added Tax without implementation of the meagre N30,000 minimum wage based on the passage of the Minimum Wage Act 2019, either by the Federal Government of Nigeria or majority of the state governments, save for some.

“We are convinced that except Nigerians rise and resist this descent to dictatorship, the future of rule of law seems bleak.

“We hereby give notice that in the coming days, if there is no reversal of the attacks on the principles of rule of law, democratic rights and living conditions of the Nigerian masses, we shall be left with no choice than to unify with our civil society allies to set machinery in motion for mass action against impunity taking over our land.”