Over the last five months, there had been rumours of Tiwa’s exit from the record label but Don Jazzy categorically stated that they were rumours.

The label was founded by Don Jazzy a year after Mohits records hits the rock and tiwa savage become it first female signee under the record.In making the new official ,Don jazzy moments ago took to his Instagram to make the announcement saying thank you 7 amazing years. 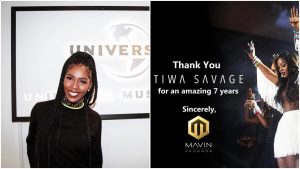