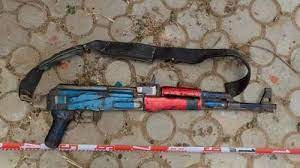 A man identified as  Mr. Chukwudi Chukwu,  who is aged 29 years old has been shot dead by a vigilante at Okposi community, in the Ohaozara Local Government Area of Ebonyi State.

NEWSNAIJA gathered that the deceased was attending a wake with his friend at Nediokpa village when the gun-wielding Hosanna Aju allegedly opened fire on him on Tuesday.

It was further gathered that the victim was to wed on April 28, 2021, before his life was cut short by the trigger-happy local security man.

The victim, from the report,, gathered hailed from the Amoji Nenwe community, in the Aninri LGA of Enugu State.

The deceased’s friend, who attended the wake with him, identified as  Mr. Innocent Ezeogo stated that the assailant approached them shortly after arriving at the venue and wanted to fire a shot in their midst.

He noted that they protested against the move and stood up to leave when the gunman shot his friend dead.

The victim’s wife-to-be, Mrs. Juliana Nnamani, said she was still in shock over the development.

Nnamani, called on the police to make sure that the culprit is prosecuted.

Also,   Mr. Emeka Chukwu brother of the deceased,   emphasized that the incident was a pointer to the number of illegal arms in circulation in the country.

Mrs. Loveth Odah,   the Police Public Relations Officer in the state, when contacted confirmed the incident.

The PPRO  explained that the culprit had been arrested and that investigation revealed that he was not a vigilante.

Odah added that the source of the locally-made gun could not be ascertained.

She said, “Plans have been concluded to arraign the suspect.”