THREE REMANDED FOR DIGGING UP 10 CORPSES FOR RITUALS 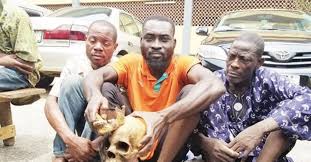 An Ekiti State Chief Magistrates’ Court sitting in Ado Ekiti, on Monday, ordered the remanding of three men in a correctional centre for allegedly digging up 10 corpses and cutting off their heads for ritual purposes.

Mrs Adefumike Anoma,  The Chief Magistrate, who ordered the defendants’ remand pending the issuance of legal advice, adjourned the case till November 6, 2020, for mention.

Inspector Monica Ikebuilo, The police prosecutor, said the defendants committed the offence between March and September 2020 in Orun-Ekiti. Ise Orun Local Government Area of the state.

The defendants, Kola Fatoye, 40; Abimbola Fatoye, 35; and Ahmed Ojo, 56, are facing a charge of exhumation of corpses.

Ikebuilo stated that “The defendants dug up graves and severed heads of corpses at the St. Paul’s Anglican Church cemetery in Orun-Ekiti,”.

The prosecutor said 10 corpses were dogged up and used for charms, which were found in the possession of the defendants without any reasonable excuse.

The prosecutor urged the court to remand the defendants in the Ado Ekiti Correctional Centre pending legal advice from the office of the Director of Public Prosecutions.

The plea of the defendants was not taken.