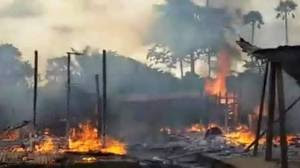 The Izombe community in the Oguta Local Government Area of Imo State has been isolated following the alleged onslaught of Nigerian soldiers against residents.

In a video posted by SaharaReporters, some agitated soldiers were seen shouting “their father”, “anyone you see, kill”.

They were reportedly angered by the actions of some unprincipled components who allegedly burnt the vehicle of the soldiers.

Also, three corpses of residents were seen on the ground as one of the soldiers said in pidgin, “no be that Igbo boy be this?”

Residents were also seen carrying their luggage fleeing the community on foot to avoid being victims of the attack.

Another resident said, “Nigeria Army is committing genocide in South Eastern Nigeria ordering kill on sight, after a mob killed a Soldier who shot an innocent man dead.

“These same soldiers will apologize for mistakenly killing an innocent civilian in the Northern Nigeria while fighting Islamic terrorist Boko Harm but in the South-East they will order them to shoot at any one.

“Ethnic cleansing is happening in Nigeria. Many people are missing and more than 100 houses burnt to ashes.”

SaharaReporters had earlier reported how villagers of the Izombe community deserted their homes over fears trailing the alleged killing of security personnel and a youth.

According to reports gathered by NEWSNAIJA , the personnel on Friday confronted a youth allegedly engaged in oil bunkering in the village and killed him.

The killing reportedly forced the youths to descend on the security personnel and killed them.

The situation became tensed when the personnel in their numbers stormed the community for retaliation, causing the burning of the palace of the traditional ruler of the community and other houses close to the Eze’s palace.