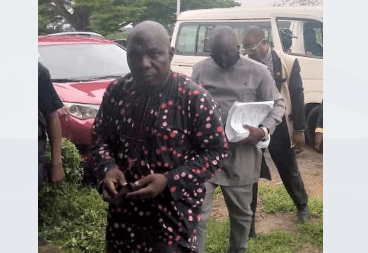 The three suspects, who are said to be staff of the Osun State Environmental Protection Commission, are said to be the president, secretary and treasurer of the staff cooperative society of the Commission respectively.

The suspects, alleged of diverting the sum that was obtained as loan for the cooperative members, were charged with 10-counts bordering on conspiracy, abuse of office, stealing, forgery, altering and obtaining money under false pretence.

One of the charges read in parts, “That Adegoke Adebayo (President), Ayodele Sunday (Secretary), Adelowo Adewole (Treasurer) and Gbenga Zacheus (currently at large) sometime in 2014, at Yemetu, Ibadan, within the Ibadan Judicial Division, obtained the sum of N83,500,000.00 only from First Bank of Nigeria Limited by pretending that it is a loan, strictly for members and staff of the Osun State Environmental Protection Commission (Osogbo) Staff Co-operative Investment and Credit Society Limited which representations you knew to be false and you thereby committed an offence.”

However, they pleaded not guilty to the charges upon which prosecution counsel, Ben Ubi, applied for a trial date and an order for the defendants to be remanded in a correctional facility.

A.T Adeleye,  The defence counsel, informed the court of a joint bail application of her clients which she said, had been served on the prosecution.

Justice Ladiran Akintola of the Oyo State High Court, Ibadan adjourned the case till October 14 for the hearing of the bail application.

The judge ordered that the defendants be remanded in the custody of Nigerian Correctional Service.

Newsnaija gathered trouble started for the defendants after First Bank of Nigeria Plc. Filed a petition to the EFCC alleging that the three in 2014 approached the bank for a loan facility to the tune of N83,500,000 on behalf of members of the society.

According to the bank, it was discovered that there was a game as the loan beneficiaries began making the repayment in amounts that fell far below the agreed monthly instalment.

In the course of investigations, the Anti-graft found out that the defendants made up the list of the loan beneficiaries and other documents they presented to the bank for the processing of the loan.