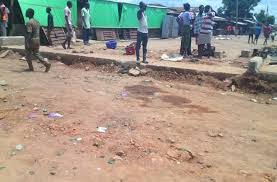 The family of Adanne Ochinachi-Opara has been thrown into mourning as the daughter of a co-tenant,  identified as Favour Adindu, allegedly stabbed her to death during a fracas at their place of residence in the Ejigbo area of Lagos State.

NEWSNAIJA learned that Adenne’s father, known as  Kennedy Opara, had left home for a child dedication when an argument started between his daughter and Favour.

The argument was said to have worsened into a fight and in the process, Favour allegedly took a knife from the kitchen and stabbed Adenne in the chest.

Neighbours reportedly rushed the victim to a nearby hospital in the area, where she was pronounced dead.

Kennedy speaking to our source said the police had begun an investigation into the matter, adding that his daughter was killed out of envy.

He said, “I am Adenne’s father; the incident happened in our place of residence and it was as a result of envy and greed. Our landlord does not stay with us. The person responsible for the crime is a tenant’s daughter; they are children and not adults.

“I have written my statement at the police station; they still want to get a corona form to be signed by the magistrate after which the case will be pushed to the SCIID, Panti, Yaba.

“As a result of the shock, my wife and children are not at home; they are all currently staying with my wife’s sister, who also lives in Ejigbo. I will give more details when I speak to them.”

Muyiwa Adejobi, the state Police Public Relations Officer, when contacted said the knife allegedly used in perpetrating the crime was recovered at the scene, adding that the incident was under investigation and the deceased’s corpse had been deposited in a mortuary.

“However, the suspect has been arrested and is undergoing interrogation, and a kitchen knife was also recovered at the scene. Further development will be communicated”.