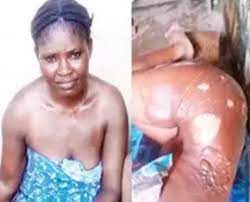 A teenager, identified as  Ijeoma Michael, is presently fighting for her life at the Garki Hospital, Abuja, after her sister, Precious, allegedly burned her body with hot water for going out.

NEWSNAIJA  gathered that 15-year-old Ijeoma had gone out about three weeks ago after she was warned by Precious not to do so it was upon her return that precious poured hot water on her, while she was serving punishment for disobeying her.

However, our source learned that their mother, Mabel refused to take the victim to a hospital on the grounds that she did not want the police to be involved.

It was further learned that the matter was reported at the Karimo Police Station by a non-governmental organization, known as the Dorothy Njemanze Foundation, and the mother and the sister were arrested.

The Lead Case Manager of the organization, named Positive Okorie, told our source that Ijeoma was rushed to the hospital, where surgery was performed on her.

Okorie,  said, “A lady sent us a message on Facebook yesterday morning (Sunday); she sent pictures and no one will see those pictures and not respond. With the help of the lady who sent the message, I went to the Karimo Police Station to make a formal report about the incident and two policemen followed us to the victim’s house in the Angwa Shehu community.

“The mother kept quiet after the incident and she didn’t take the victim to the hospital; she only took her to a chemist shop, where she was given tetanus injection and Ampiclox. She said she didn’t take her to hospital, because she did not want to get the police involved because of the extent of burns on her body.”

Okorie said the suspects denied pouring hot water on the victim intentionally, adding that they claimed that it happened by mistake.

Speaking on the treatment of the victim, Okorie said Ijeoma was only attended to after she had signed an undertaking that the medical bill would be settled before her discharge.

She added, “I’m sitting right in front of the theatre and she’s having surgery to correct some of the places the hot water had scalded. The surgery costs about N250,000; I just had to sign an undertaking that the money will be paid on or before she is discharged. I don’t know how that will play out.

“When I asked how much money would be needed, I was told that about N450,000 excluding her feeding; surgery is taking N250,000 and the ward she will stay in is N13,000 per night and we don’t know how long she will stay. For use in the organization, her health and how to clear her medical bill is our concern because I just signed an undertaking that her bill will be cleared on or before her discharge.”

“We are investigating ma,” she stated.