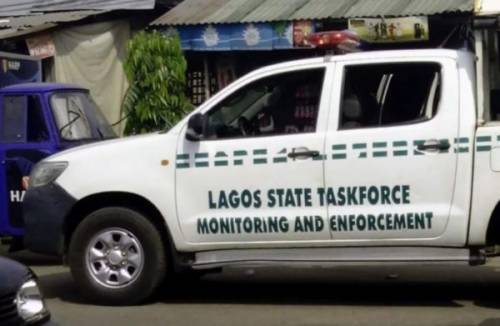 The Lagos State Task Force on Environmental and Special Offences (Enforcement) Unit said it arrested one DSP Popoola Kayode and his team members for allegedly extorting N100,000 from a traffic offender.

NEWSNAIJA learned that a resident, identified as  Didi Ekanem, accused the state task force of extortion and harassment.

Ekanem said Kayode, after making sexual advances at her, demanded money,  she said she transferred N100,000 into his account after negotiations.

The task force, in a statement signed by  Adebayo Taofiq, the Head of the Public Affairs Unit, Adebayo Taofiq, said Kayode and his team members had been arrested and transferred to the Lagos State Police Command for disciplinary actions.

The statement read in part, “Sequel to the report, the Chairman of the agency, CSP Olayinka Egbeyemi, immediately investigated the matter and discovered that the vehicle (Venza APP 775 GJ) was impounded for driving against traffic around the Lekki-Ajah Expressway by the enforcement team of the agency on Wednesday, November 18, 2020.

“The investigation revealed further that the vehicle was brought to the agency’s car park at Alausa, Ikeja. The leader of the team, DSP Popoola Kayode, who is not the commander of the agency as quoted in the report, collected the sum of N100,000 via a bank transfer in his account before he released the vehicle to the owner (Didi Ekanem).

“The leader of the team and his members have been arrested and queried by the chairman, while they would be sent back to the Lagos police command for further disciplinary actions.”

The CSP,  however, warned residents to desist from driving against traffic and report any officers involved in shady deals.