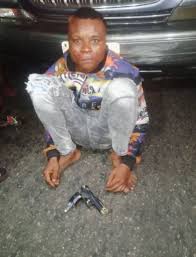 A vigilante group in the Diobu, Port Harcourt Local Government Area of Rivers State, has arrested a suspected robber with a fake pistol.

Prince Amatari,  Chairman of the group, said the suspect, identified simply as Kingsley, was arrested while trying to rob a lady with the pistol.

The vigilante Chairman explained that the suspect belonged to a gang that had been robbing residents in the Ada George area, adding that he was driving when he saw the suspect attempting to rob the victim.

Amatari said, “I witnessed it with my younger brother. My brother first jumped down from the car, went after him, lifted him up, and threw him on the floor. The gun he was holding fell.

“Then I asked my brother to collect the gun, which he did. So, I later checked the gun and saw it was a rubber gun.”

The Chairman pointed out that the vigilantes, with the continued support of the police, would not relent in fighting criminal activities in the state adding that two other members of the gang were on the run.

The suspect (Kingsley)  said his two accomplices, who were on standby on a motorcycle, zoomed off after he was apprehended by the vigilante members.

Nnamdi Omoni,  a  spokesman for the state police command, said he had yet to be briefed about the incident.