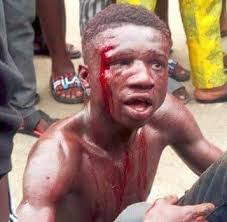 The Rivers State Police Command has arrested a suspected mentally unstable man who allegedly killed and burnt an unknown lady near an uncompleted building along Rumuekini end of the East-West Road, Obio/Akpor Local Government Area of Rivers State.

NEWSNAIJA learned that after killing the woman, the man wanted to cover his crime by setting the victim on fire but policemen who were notified dived on the suspect, arrested him, and removed the corpse.

Residents of the community, who conveyed shock over the development, said the decomposing corpse of the woman was discovered when the stench permeated the area.

A resident said, “When we came to work on Monday, there was a foul smell near an uncompleted building.

“So, we went there and saw the corpse of the lady. It is surprising that we are there, but don’t even know about it if not for the smell that makes us suspect that something had happened.”

SP Nnamdi Omoni,  the spokesman for the state police command, confirmed the killing and the arrest.

Omoni said, “The body has been evacuated and deposited in the mortuary. Investigation is still ongoing to ascertain what really happened,”.