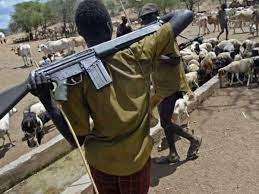 NEWS reaching us says four people, including a traditional ruler, have been killed by suspected herdsmen in separate attacks on two local government areas of Benue State.

Two people were reportedly killed in Guma and another two in Makurdi LGAs.

NEWSNAIJA gathered that the traditional ruler, idenrified as Chief Hyacinth Ajon, and a man, Benjamin Anakula, were killed on Wednesday in Tse Zoola, in the Makurdi council.

The two other people were also killed on Wednesday in the Mbayer-Yandev in the Guma LGA.

Governor Samuel Ortom paid a condolence visit to Tse Zoola where the monarch was killed on Wednesday.

The eldest man in the community, Pa Aho Zoola told him, saying “The armed herdsmen attacked villagers around 2am, when the people were fast asleep, and killed two people.” Adding that the attack was carried out by the suspected herders without any incitement.

Aho said the community had never rustled the herdsmen’s cows, adding that his people had never had any issues with the herdsmen even when their herds graze on their crops.

The governor, who sympathized with the villagers, promised that he would get security agents deployed in the area.

Meanwhile, Caleb Aba, Chairman of Guma LGA, who confirmed the attack on Mbayer-Yandev, told journalists on the phone that the incident occurred at about 8pm on Wednesday.

DSP Catherine Anene,  the  Police Public Relations Officer, could not be reached at the time of  filing this story.