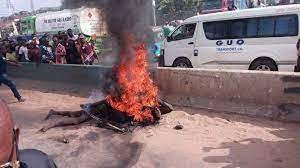 On Monday a man yet to be identified was set ablaze at the Nkpor junction in the Idemili North Local Government Area of Anambra State.

NEWSNAIJA learned that the suspect snatched a handkerchief from a victim and ran away, thinking that it was money.

A source said, “The deceased, in company with his gang members, was at the junction robbing passers-by of their valuables.

“The deceased stole a handkerchief from a victim’s pocket and took off with his gang members, thinking it was money

“The victim raised the alarm, which attracted sympathizers, who instantly mobilized and pursued them.

He said “One of them was caught, while the others escaped. The nabbed robber was beaten to a pulp and asked to disclose the whereabouts of his fleeing accomplices, but he refused and was set ablaze.”

The PPRO said the body of the deceased had been recovered, while investigation had begun.

The PPRO said, “Around 11 am, there was a mob action on a suspected thief that resulted in the setting ablaze of the suspect at the Nkpor roundabout.

“Police operatives attached to the Ogidi Division quickly rushed to the scene, recovered the body and cordoned off the area to prevent a breakdown of law and order.”