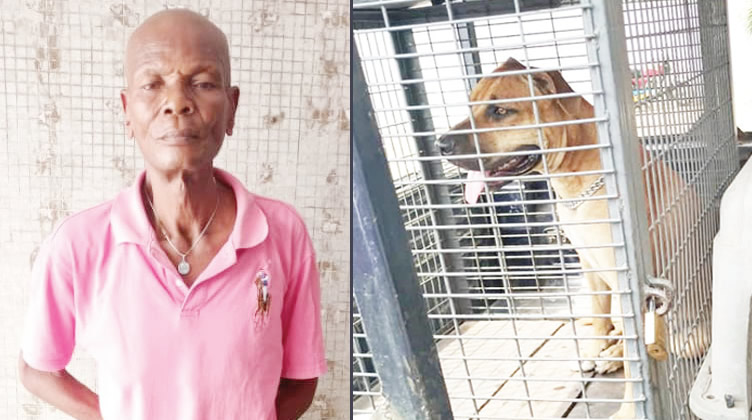 A man, identified as Adeyemi Abayomi, has been arrested by men of the Lagos State Police Command for allegedly realizing his dogs on policemen detailed to invite him to the Surulere division of the command because of a complaint against him.

NEWSNAIJA learned that when the policemen entered Abayomi’s compound, he allegedly released the dogs to attack them.

While others fled the scene, an inspector, Atim Umoh, was unlucky as she was injured.

Muyiwa Adejobi,  the state Police Public Relations Officer, in a statement on Thursday, said Abayomi had been arrested.

Adejobi,   said, “The state Commissioner of Police, Hakeem Odumosu, has again reiterated his commitment to defending security personnel against attacks from individuals and groups while discharging their legitimate duties.

“The police boss revealed this on Thursday, March 4, 2021, while reflecting on the case of one Adeyemi Abayomi, of No 115, Itire Road, Surulere, who released his dogs to attack police operatives on invitation in his compound where the dogs were released and ordered to bite woman inspector Atim Umoh and caused her bodily injuries.

“The incident occurred on Tuesday, March 2, 2021, around 11.30 am when one Madam Nneka Regina, of No 103, Lagos Street, Ebute Meta, went to the Surulere division to complain against the criminal attitude of the suspect for illegally occupying her property at No 115 Itire Road, Surulere, and threats to life. The police operatives attached to the Surulere division were sent to invite the suspect before he ordered his dogs to attack them.

“The CP has ordered that the man be arrested and taken to the State CID for investigation and prosecution, while his dogs be picked up by the Police Dog Section (K-9) for further action.”