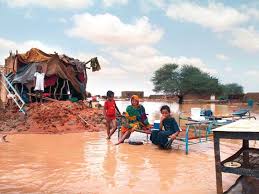 The report reaching us says not less than 20 people have been killed leaving 13 others wounded,  with 345 houses badly destroyed in yesterday’s rains and flooding, that hit eastern  Sudan.

It was gathered the Heavy rains typically hit Sudan between June and October each year, and this week the country has been badly affected by the downpour.

It was learned the latest deaths brought the total number of people killed to  35  since the end of July and not less than 7,000 houses destroyed as a result of heavy rains and flooding.

Meanwhile, The UN said reported that more than 50,000 people had been affected by the flooding.

The civil defense also reported on  Sunday that it had dispatched helicopters and supplies to eastern Sudan where a group of miners is stranded due to rising waters.