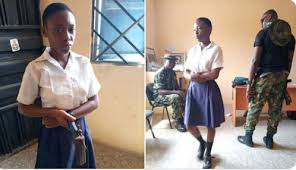 A teenage senior secondary school girl has been prevented from killing her teacher with a pistol in Cross River State.

NEWSNAIJA learned that the student, whose name was withheld, was arrested at the Government Secondary School, Ikot Ewa, in the Akpabuyo Local Government Area of the state.

Emmanuel Offiong-Bassey, the Chairman of the council who spoke to journalists on Thursday, said he was told the suspect was about to shoot her target when she was disarmed.

Offiong-Bassey, said, “How she got the gun, I do not know. The information I have, which may not be very accurate, is that when she wanted to bring out the gun to shoot at her target, another teacher who was behind her quickly stopped her. I learned she is still in the custody of the army.”

The Council Chairman advised parents to pay attention to the company their children keep and their daily activities.

Igiri Ewa,  the state Deputy Police Public Relations Officer, confirmed the incident but said the suspect had not been handed over to the police.

He added, “Once we gain access to the matter, we will invite the press,”.

NEWSNAIJA  further learned that the girl had gone to school with tinted hair and her class teacher asked her to go home and shave the hair.

She was said to have got angry and allegedly decided to get a gun to shoot the teacher.