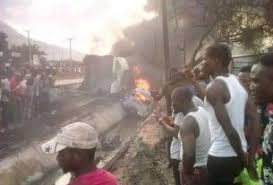 No less than six persons were confirmed dead on Monday when a tanker laden with petrol rammed into two tricycle operators at Ntak Inyang village, a few kilometers to Uyo, the state capital.

NEWSNAIJA gathered that the tanker instantly caught fire and burnt the two tricycles and their passengers, including a female and five others.

It was further learned that the accident occurred in the early hours of Monday on a side of the road which is undergoing rehabilitation.

A source said congestion on the free lane compounded the traffic.

The source added that “The truck rammed into the approaching tricycles from the opposite direction, resulting in the accident,”.

Ochi said, “Actually, six people died: one female and five males. Our investigators have gone there and the primary report they have given confirms that two trucks were involved in the crash, but one escaped.

“The truck that caused the accident sped off. It overtook at that point, and this one was trying to veer off from the truck that was overtaking when it ran into the two tricycles.”