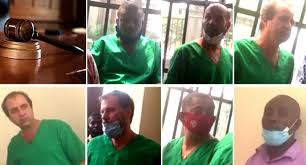 The Federal High Court sitting in Port Harcourt, the Rivers State capital, has sentenced six foreigners and a Nigerian to seven years imprisonment for oil theft.

Justice J. K. Omotosho gave the verdict on Monday after three years of prosecution by the Port Harcourt Zonal Office of the Economic and Financial Crimes Commission.

A statement by Wilson Uwujaren, the Head of Media and Publicity, EFCC, identified the Nigerian as David Otuohi.

The convicts were arraigned on November 21, 2017, alongside three other foreigners and another Nigerian for oil theft.

The other three foreigners, Victor Mikpayi (Beninois ), and Francis Ahorlu and Kwesi Attah (Ghanaians),  and Victor Azebiri (Nigerian) were discharged and acquitted by the court.

They were arraigned alongside a company,  identified as Asztral Shipping Corporation SA, and a vessel, MT. TECNE also is known as  MT STAR, on four counts bordering on conspiracy, dealing in petroleum products without a license, and tampering with oil pipelines.

However, the defendants pleaded not guilty when the charges were read to them.

Their pleas prepared the ground for their trial by the EFCC, which for three years presented evidence and witnesses against the convicts.

Justice Omotosho, In his judgment, found the 2nd, 3rd, 4th, 5th, 6th, 7th, and 11th defendants guilty of all the four charges and sentenced them to seven years’ imprisonment with an option of N2m fine each, while the 1st, 8th, 9th and 10th defendants were discharged and acquitted on the grounds that “they were not linked to the commission of the crime”.

The sentences run concurrently from the date of their arraignment.