SHOCKING : Father Nabbed At The Verge Of Selling Off His Two Children For 350k 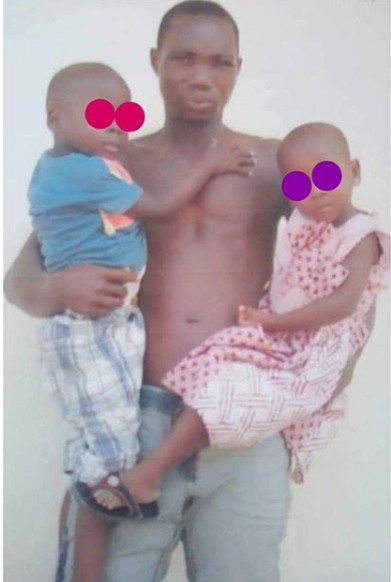 News reaching us says a Nigerian father who attempted selling his male child for N200k and His Female Child for N150k has been arrested by the Cross River State Police Command.

Mr Edet Essien Inyang -30 according to an witness report took his kids to Murray Street where he sought buyers to enable him raise money. According to him he embarked on the costly mission because he wanted to escape poverty forever aid he took the path to escape poverty.

“He came here with the children and asked after one rich man on this street and when he did not see the man, we asked him what he was looking for the man for and he said was looking for someone to buy his two children. He said the male child is N200, 000 and the female N150,000.”

Edem further disclosed that in order to stop him from taking the children somewhere to sell, they had to “delay him while making efforts to contact the Police at Atakpa Police Station which is close-by, and immediately sent a team to arrest him. He said he is from Akwa Ibom State but resides in Using Inyang,” Edem added.The man who tried selling his son for N200k and daughter for N150k, has since been transferred to the State Criminal Division at the Police Command headquarters for further investigations.