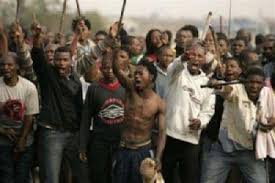 No less than seven persons have been killed in a supremacy battle of rival cults believed to be members of the Aye and Bangas confraternities in Ughelli, in the Ughelli North Local Government Area of Delta State.

NEWSNAIJA learned many people reportedly sustained varying degrees of injury in the attack.

the report gathered stated that trouble began last Friday after a clash between the two cults led to the death of an Aye member.

Sources said the killing was greeted with reprisals, during which casualties were recorded on both sides in various locations of the metropolis.

According to sources, one of the strongmen of Bangas was murdered on Akpodiete Street, Ughelli, while two of his opponents were similarly killed in Ekiugbo.

Another cult member was shot dead on Oghenevwetata Street in Ughelli on Saturday night.

Our source gathered that two victims, identified simply as Frank and Oghenero, were brothers.

The report says there were reportedly trailed to their house at Poyo compound, close to Ataverhe Junction in Ekiugbo-Ughelli, where they were attacked.

Frank and Oghenero, according to sources, were dragged from their room to an uncompleted building in the compound, where they were shot dead.

Meanwhile, DSP Onome Onovwakpoyeya,  the state Police Public Relations Officer, was unreachable for comments as of the time of filing this report.