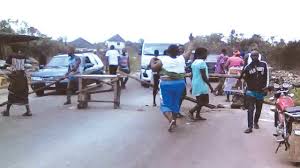 Not less than seven persons have been reportedly killed during a renewed clash involving residents in Emede and Igbide communities, in the Isoko South Local Government Area of Delta State.

NEWSNAIJA gathered that the clash between the communities resurfaced on Tuesday and escalated into the burning of houses that left many residents displaced.

It was further learned that residents deserted their homes and scampered for safety.

A source said, “As I speak to you now, my wife’s younger brother from Emede has packed to my house in Ughelli. Igbide is attacking Emede residents, with over seven persons from Emede killed by the attackers from Igbide. The people of Emede have yet to retaliate, as they are fortifying themselves against further attacks from Igbide.”

Itiako Ikpokpo,  The Chairman of Isoko South LGA, told journalists that the number of casualties could not be ascertained, adding that the clash took everyone by surprise.

“We should be able to confirm the casualty figures at the end of the day.  Some persons are missing and two dead bodies have been found. We were shocked when the clash started and I have been in touch with both communities; only members of the communities can tell us what triggered the hostility.

“As a government, there is no reason for this hostility. We were already talking about issues raised by both communities, only for this to happen. The police and army have responded and are currently on the ground in both communities to effect the arrest,” he said.

Onovwakpoyeya,   said, “As of yesterday night (Wednesday), 19 houses have been razed following the hostility between both communities.  But the number of deaths as of this morning (Thursday) was two.”