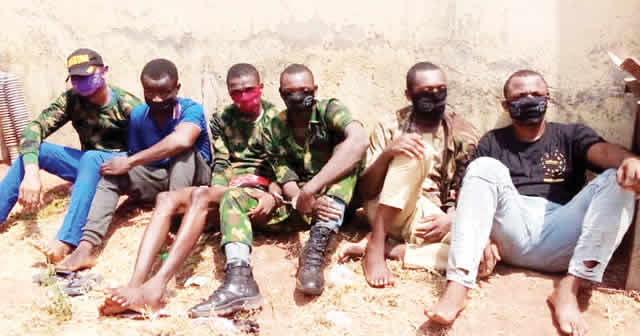 The Delta State Police Command has apprehended seven suspected fake military men and twenty-three others for various crimes, including armed robbery, impersonation, unlawful possession of military equipment, cultism and unlawful use of siren/SPY number plate, among others.

Muhammed Ali,  the   Delta State Commissioner of Police, stated this on Wednesday while parading the suspects at command headquarters in Asaba.

The CP said, “A patrol team from the ‘B’ Division, Ughelli, while on stop-and-search duty on the Uduere-Ughelli Road, interrupted one Honda vehicle with number plate JT-859-EKY driven by one Sunday Digbor, 44.

He said “Upon interrogation and a search of the vehicle, two military caps, and one military T-shirt were recovered from the suspect.

“Similarly, a team of Delta Hawk on patrol by the Midwifery junction, along Okpanam Road Asaba, interrupted two suspected stolen vehicles, a red Toyota Corolla with a covered number plate and a black Mercedes Format SUV without plate number with six occupants.

“On-the-spot search was conducted and six pieces of Army camouflage uniform, one Army beret and a fez cap, one bayonet, and one porch were recovered from the suspects. An investigation is ongoing to arrest other members at large.”

The Commissioner of Police said the success documented by the command lately was due to the pro-active anti-crime strategies of the command.

Ali said that command had a directive to provide suitable security for the good people of Delta State and make sure that the state was safe for all.

Items recovered from the suspects include over 35 guns of different make, pieces of ammunition, seven exotic vehicles, and military equipment, among others.