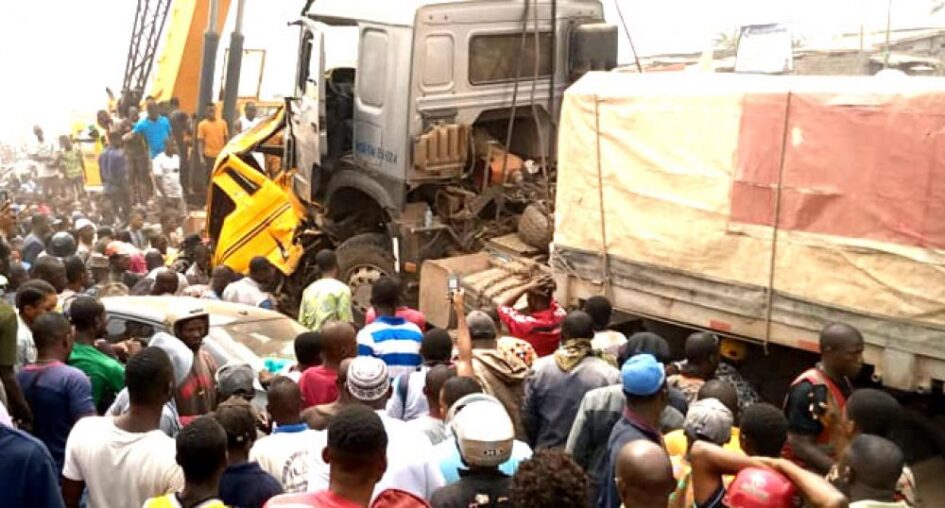 In the morning hours Thursday, Seven persons were feared killed, while many others sustained injuries after a truck rammed into some stationary tricycles at the Bell Junction area of Ogun State.

NEWSNAIJA learned that the accident, which occurred around 10 am, involved a truck, whose driver lost control and rann into the tricycles and some commuters waiting at the bus stop.

It was further gathered that the truck driver was heading for Idiroko Road when he lost control of the vehicle and in an attempt to avoid crashing into the other vehicles, ran into the stationed tricycles, killing seven persons and injuring many others.

Gbenga Osinaike, an eyewitness, told our source that a yet-to-be-identified elderly man, who was standing by the roadside, died on the spot, while six others died shortly after.

Osinaike, said, “As soon as the driver lost control of the vehicle, he swerved to the right side of the road to avoid running into the vehicles ahead of him, but the move backfired as he ran into the commercial tricycles parked by the Bells junction to pick passengers and some people standing by the bus stop.

“An elderly man standing by the road died on the spot with blood gushing out of his body, while six others died shortly after, and by the time the vehicle eventually came to a halt, several others had been injured.”

A community leader, who simply  gave his name as Alhaji Yussuf, also confirmed to our source that many persons were injured

Yussuf,  said, “many people were injured apart from the seven who died. It’s so sad that many innocent people had to die like that and several tricycles and motorcycles were also damaged in the process,”.

It was learned that an angry mob beat the truck driver to a pulp before he was rescued by some good Samaritans, while his vehicle was set ablaze.

Also, some officials of Bells University provided first aid to the injured victims before they were taken to hospitals.

Ahmed Umar, the Ogun State Sector Commander, Federal Road Safety Corps, who confirmed the death of two people, said the agency could not carry out a rescue operation because the residents turned violent.

He said, “We received the distress call, but we could not carry out any rescue operation, because the residents turned violent, but we learned that two people died,”.

Abimbola Oyeyemi, the state Police Public Relations Officer, when contacted, said he would get back to our source but as at the time of filing this report, he was yet to do so.