SCHOOLBOY, ONE OTHER KILLED IN ANAMBRA AUTO-CRASH 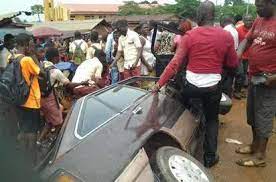 NEWSNAIJA learned that the schoolboy was crossing a road in the Oyi Local Government Area of the state when he was knocked down by a speeding Camry car.

The other victim was a passenger on a motorcycle in Nnobi, Idemili South Local Government Area of the state.

It was further learned that the Nnobi crash was caused by poor visibility occasioned by a heavy downpour.

Confirming the incidents, Andrew Kumapayi, the Sector Commander, Federal Road Safety Corps in the state, said the bodies of the deceased had been deposited in the mortuary.

Kumapayi,   said, “A fatal crash occurred opposite the Oyi Divisional Police Headquarters. An unidentified driver of a Toyota Camry car with number plate KJA 172 CE knocked down a male child crossing the road.

“One male child crossing the road was knocked down by the speeding Camry car and was rushed to the Chira Hospital, Awkuzu, by the FRSC rescue team from Nteje; he was later confirmed dead by the doctor on duty. His body has been deposited in the Wisdom Mortuary, Nteje.

“On the second crash, an unidentified driver knocked down a CG 125 motorcycle rider and his passenger.

“Two male adults were involved in the crash. One male adult, the rider of the motorcycle, sustained injury and was taken to St. Paul’s Hospital, Nnobi by a sympathizer.

He said, “The passenger was pronounced dead by the doctor on duty at the same hospital and his body was deposited in the Fatima Morgue, Awka-Etiti, by the FRSC rescue team from the Nnewi Command.”