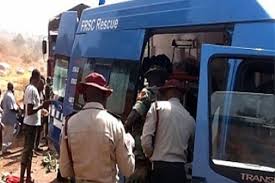 Six persons, including two newborn babies, have reportedly died in a fatal accident at Ibusa Bypass, close to ADP Farms, in the Oshimili North Local Government Area of Delta State.

NEWSNAIJA learned that the accident occurred on Thursday around 12 noon at a diversion point.

It was further gathered that the vehicles were diverted to one lane due to ongoing construction works on the second lane.

A witness said that six people were severely injured.

“Six persons died, including two newborn babies, while about six other persons were injured.”

He stated that the accident was caused by reckless driving.