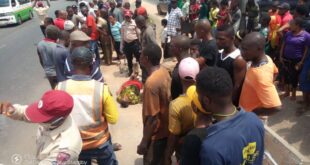 On Wednesday, Four hawkers were, crushed to death in Onitsha, Anambra State.

The accident, which occurred around 7.30 am, involved a Mercedes Benz truck.

An eyewitness told our source that the truck driver was trying to dodge revenue collectors in the area when he rammed into the victims.

Florence Ndor,  the  Anambra State Sector Public Education Officer, Federal Road Safety Corps, who confirmed the incident, said the victims’ corpses had been deposited in a morgue in the area.

Ndor,  said, “Around 7.39 am today, February 24, 2021, at the Upper Iweka flyover, four female pedestrians were crushed to death by a blue Mercedes Benz truck with number plate XF 259 UNZ.

“Report reaching us states that the truck driver had an argument with the revenue collectors at the Upper Iweka flyover and the truck rolled back and crushed four female hawkers along the road.

“Also involved was the driver and his motor boy, who came out without injury.

“The FRSC, Nigerian Army, and Nigeria Police rescue teams rushed the victims to the Toronto Hospital and deposited the corpse in the hospital’s morgue after a doctor had pronounced them dead.

“The driver of the vehicle has been handed over to the police for further investigation.”