SAD AS LOVERS WERE FOUND DEAD IN DELTA APARTMENT 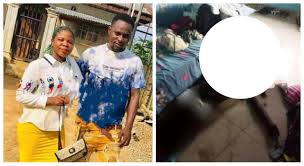 There was chaos  on Sunday in Sapele town, in the Sapele Local Government Area of Delta State, following the death of a young man identified only as Ufuoma, and his girlfriend, Matilda.

NEWSNAIJA learned  that the victims attended a party the previous night and got home late, only for their lifeless bodies to be discovered the next morning.

A source said the lovers were found dead in their apartment along the Niger Delta Development Commission Road in the Amukpe area.

He said “Ufuoma’s car was on the premises that morning, which caused curiosity among neighbours.

“The neighbours knocked on their door without any response; they peeped through the window and discovered that one of them was on the bed, while the other was on the floor, lifeless.

“The two lovers were new in the environment; they returned from abroad in 2019. We believe they died from food poisoning,” he added.

Efforts to reach the state Commissioner of Police, Ari Muhammed, and the state Police Public Relations Officer, DSP Onome Onovwakpoyeya, failed, as several calls to their phones were not responded to.