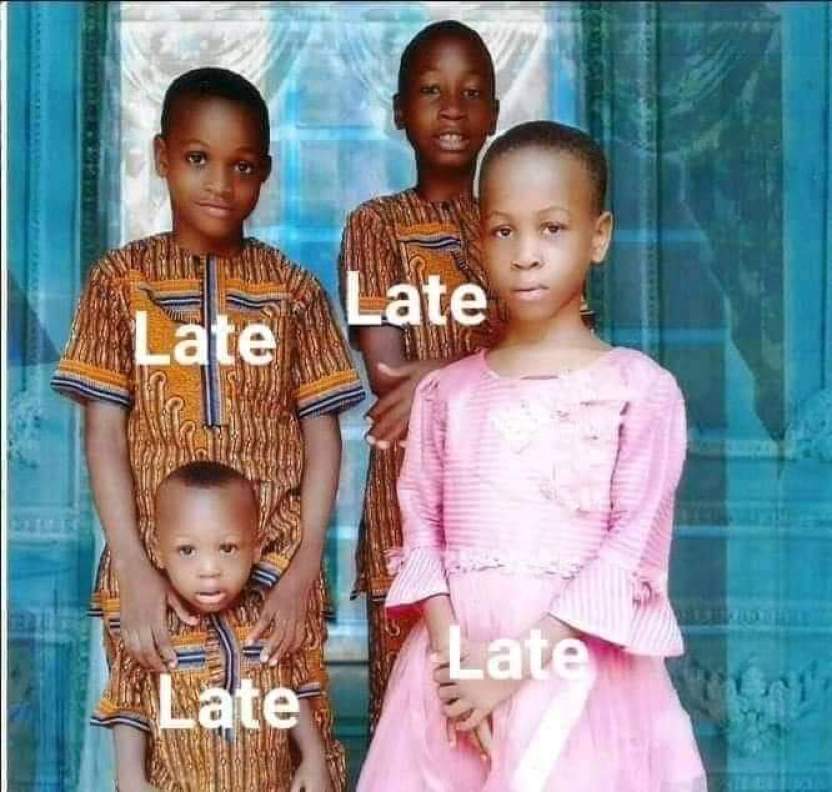 NEWS reaching us says four  children  from a family of seven , has lost their lives after allegedly eating Suya

NEWSNAIJA learned the four children who are identified  as  Kelechi Chibuzor, 12; Sunday Chibuzor, 10; Oluomachi Chibuzor, 8; and Kingsley Chibuzor, 3  were laid to rest in Umuahia, the capital of Abia State on Saturday..

According to the report gathered , the cause of death is still being researched.

Ugochukwu Ogbonna, Bishop of Goodnews Pentecostal Church, Umuahia, spoke at their funeral on Saturday, urging their parents to take heart.

the cleric  stated that everyone is a sojourner on earth and no one knows when he would die when speaking on the theme of “The Journey of This Life and the Call of Eternity.”

The priest praosed  Ikwunze Chibuzor, the victims’ father and his wife for leading the children in the way of the Lord, and begged for their souls to rest in peace.

Chief Obi Aguocha, the President General of Ohuhu, advised the parents and relatives of the children to remain strong during this trying time.

He said, “It is painful to wake up one day and lose your entire family. People lose one or two, but not four. It should not happen again.

“It is customary for children to bury their parents, but their father is returning to God what He has given him.”

He revealed that the clan handed the family N4.8 million “plus something else for the children that will follow.”

He urged community members not to forget the family while appealing to the bereaved couple to see their destiny as the start of a new life.

At the funeral, Ifeanyi Onuigbo, who was represented by Henry Eleogu, a member of the National Assembly representing the Ikwuano/Umuahia Federal Constituency, promised to stick by the family and prayed to God to give them the strength to bear the loss.

Ikwunze, the bereaved father, thanked everyone who helped his family financially and with words of encouragement in his speech.

He indicated that autopsy reports on his children’s deaths would be released in the next two weeks, despite rumors that they perished from eating Suya or inhaling generator fumes.