SAD AS FAMILY BREADWINNER DROWNS WHILE DIGGING WELL IN LAGOS 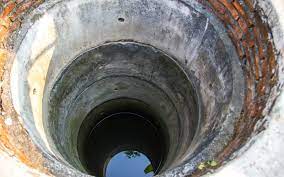 A family breadwinner, identified as Abubakar Jubri, has lost his life while digging a well in a compound in the Shasha area of Lagos State.

NEWSNAIJA learned that Jubri and his partner, Abu Yaro, were contracted to dig a well in the house and after digging to a certain level, the deceased started packing out sand from the well but suddenly stopped communicating with his partner.

It was further learned that Yaro raised the alarm, which attracted the attention of one Shaibu Adamu, who reportedly brought Jubri’s remains out of the well.

Speaking with Newsnaija, the owner of the house, identified as Yinka Ayetigbo, said one of his tenants employed Jubri and Yaro to dig the well, adding that after he was informed about the incident, he proceeded to make a report at the police station.

Ayetigbo, explained that a medical practitioner was contacted to assess Jubri and he pronounced him dead, adding that the deceased was the breadwinner of his family.

Ayetigbo stated, “The incident occurred in my house and I was called when it happened and I took responsibility for the whole thing.

The person, who died, was the breadwinner of his family. It was not me who contracted him; he was contracted by one of my tenants. It was not just him, they were two and in the process, the other person noticed that Jubri was no longer making contact with him regularly as he was doing initially.

“He was inside the well and the other person was outside; the first thing that was done was to bring him out from there to check his pulse and that was how they discovered that he had stopped breathing. All these that I am telling you are what I heard. So, when I was called and came there, he was already dead.

The only step I had to take was to report to the police and after that, we called a medical practitioner to have a look at him and he pronounced him dead.

He said  “I took everything on from there; just because he died while doing his work doesn’t mean that I have to abandon his family. I took up the responsibility for his burial and as a Muslim, he was given his rightful honor and buried that same day. I can’t put that burden on his family, because they didn’t plan for that unfortunate incident and the expenses that come with it.”

When contacted, Muyiwa Adejobi,  the state Police Public Relations Officer, said Jubri died in the process of picking out sand from the well, adding that there was no mark of violence on his body as it was brought out of the well.