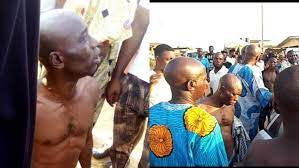 The parents of a nine-year-old girl in the Kaiama Local Government Area of Kwara State allegedly caught a 60-year-old man, identified as Jeremiah Oyedokun, in the act of defiling their daughter.

NEWS NAIJA learned that Oyedokun of Ileloja Compound, Kaiama, was on Friday around 5.30 pm, caught having carnal knowledge of the minor, who he allegedly enticed with N50.

The Nigeria Security and Civil Defence Corps,(NSCDC)  which confirmed the incident, said its operatives arrested the suspect.

Babawale Afolabi, the Public Relations Officer, NSCDC, Kwara State Command, in a statement, said, “In spite of the campaign against rape and enlightenment by the corps, another case was reported to our divisional headquarters in Kaiama on Friday, May 28, 2021.

“It happened around 5.30 pm, when Jeremiah Oyedokun, 60, of Ileloja Compound, Kaiama was caught in the act by the parents of a girl having carnal knowledge of their nine-year-old daughter from the same area.

“The suspect lured  the victim by giving her N50; the suspect confessed to the crime and the girl has been taken to the General Hospital, Kaiama, for proper medical test.”

The PPRO   said the case had been transferred to the state command headquarters, Ilorin, for further investigation and prosecution, while the suspect would be charged when courts reopen after the judiciary workers’ strike.