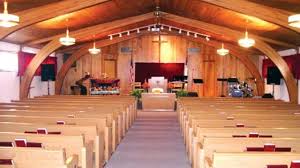 The Assemblies of God Church branch in Abakaliki, was on Thursday morning attacked by armed robbers who raped a girl and shot another.

Newsnaija gathered that Some youths belonging to the drama unit of the church were said to be having an all-night rehearsal in preparation for a drama program on Friday when they were attacked between 1 am and 2 am by the armed men.

A source said that while they raped one of the girls, another was shot on the laps for trying to resist their attempts to rape her.

They also stole some equipment belonging to the church.

Our source,  who visited the church, met the absence of the pastor in charge, but one of the elders of the church, who spoke on condition of anonymity, confirmed the incident.

The church elder said, “Yes what you heard is true, we were notified of the incident this morning. Our pastor is not available now.

“However the matter has been reported to the police and the girls have been taken to hospital for treatment.”

Meanwhile, Mrs. Loveth Odah, The police spokesman in the state said she had yet to be briefed about the incident.