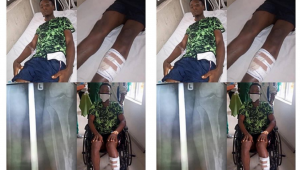 Some personnel of the Rivers State Police Command has shot a 19-year-old boy’s leg identified as Ledisi Kote, for impregnating a girl.

Ledisi is currently battling for his life at an undisclosed hospital.

Newsnaija learned that the boy was shot by some cops attached to the Kpor Division in the Gokana Local Government Area of the state.

It was gathered that on August 21, 2020, being Friday, the officers stormed Ledisi father’s residence in the K. Dere community around 7 am and demanded to see the teenager.

While the boy’s father was still asking questions the policemen went into Ledisi’s room, brought him out, and shot him in the leg.

Tuka Loanyie, a human rights activist, who made a post about Ledisi’s case on Facebook, stated that the policemen, who took the victim away after shooting him, dumped him in a private hospital in the area.

The human rights activist who demanded justice for the victim noted that Ledisi would have to undergo three surgeries before he could walk again.

Loanyie , the post read, “According to the sick father of the victim, he was in his compound when a Sienna vehicle drove into his compound with about four armed policemen.

“They went straight to his son’s room door, banged and cocked guns. He approached them to inquire from them what his son did wrong that they were looking for him, but none of them answered him. It was one of them who angrily told him that his son impregnated a girl.

“The next thing he heard from the backyard of his house was a gunshot. One of the officers shot his son’s leg simply because he impregnated a girl. They went away with him while he was bleeding profusely and hid him in a private hospital.

“I am making this post because up till now, the officer that did this is yet to take full responsibility for the medications. The doctor said he would have to undergo three different surgeries or else his leg might be amputated. We want justice for this boy. It could be me or you tomorrow.”

However, the matter was reported at the Rivers State Police Command headquarters, Moscow Road, Port Harcourt.

When Nnamdi Omoni, the state Police Public Relations Officer,  was contacted he confirmed the incident and stated that the officer who shot the teenager had been arrested.

Omoni  in his statement said “We aware of the matter and action has been taken. The policeman, who shot the victim, has been disarmed and detained at the state CID, while the victim is also receiving medical attention at the hospital.adding that investigation is ongoing,”.