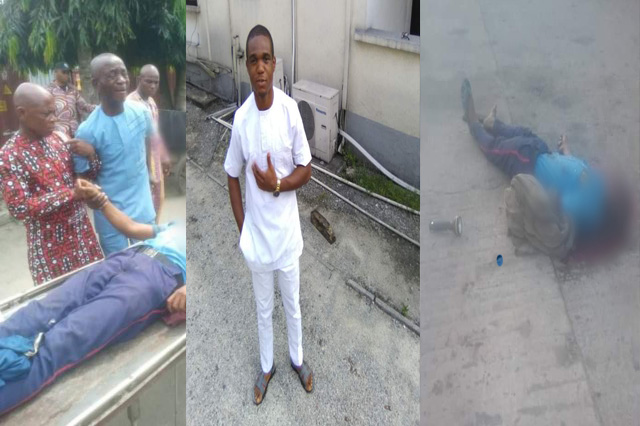 Innocent Gbaraka,  the father of a Rivers 29-year-old security guard shot dead by a trigger-happy policeman in Port Harcourt on Sunday has demanded justice and threatened to end his life if the killer of his only son was not brought to justice.

The 62-year-old retiree, from the Gwara community in Khana Local Government Area, said he didn’t have any more reason to continue living after his son’s death.

Gbaraka said he was informed of his son’s death in Church on Sunday that a policeman working at the same firm with his son had shot him dead while he was on duty.

He said Although it was still unclear what actually took place between the victim and his assailant identified as Inspector James, it was gathered that the victim was shot in the head around 2 am on Sunday and the corpse deposited at the University of Port Harcourt Teaching Hospital mortuary.

Narrating to Journalists in Port Harcourt on Monday, the father of the deceased said, “I was in Church when someone came to inform me that my son who left the house for work is dead, I thought that it was a joke until the person that informed me took me to UPTH where I saw my son in his security guard uniform laying dead in a pool of his own blood.

Gbaraka said his son who was an accounting graduate from the Imo state polytechnic was his family’s breadwinner and his only hope, adding that he has not come to a reality that he was going to bury his beloved son who he had high hopes in.

He said “I don’t know what my first son did to the policeman that killed him, all I want now is for justice to prevail. I don’t have anybody that is why I haven’t stopped crying since the incident, my son was my only hope, he was a graduate of the Imo State Polytechnic, I’m finished, my son has always cared for me and his mother.”

While crying and lamenting  Gbaraka said, “I want to hang myself because that is the best thing for me to do now, the only thing I am waiting for now is justice, if justice does not prevail, then I have nothing to continue living for, he was supposed to bury me, not me burying him.”

Meanwhile, the Ogoni Youth Federation has threatened to carry out a mass protest in the state if the police failed to arrest and prosecute the accused policeman within 48 hours.

Legborsi Yamaabana, Speaking on behalf of the youths, called on the state Governor, Nyesom Wike, to identify with the grieving family of the late Gospel Gbaraka and to prevent the 62-year-old father from ending his life following the incident.

Yamaabana,  said “We request that inspector James face justice within 48 hours and the family of the victim taken care of.

He said “We are further requesting  that the Governor of Rivers State with immediate effect meet with the victim’s family and sympathize with  them because we don’t want the father of this boy to commit suicide, we don’t want suicide in our state.”

On his part of Joseph Mukan,   the State Commissioner of Police, he assured the people that justice would be served in the matter as no police officer found wanting would be shielded from prosecution, adding that the duty of every police officer was to protect innocent citizens and not to kill them.

“We have already put internal mechanisms in place to make sure  that justice is served in this matter and you will see it done.”